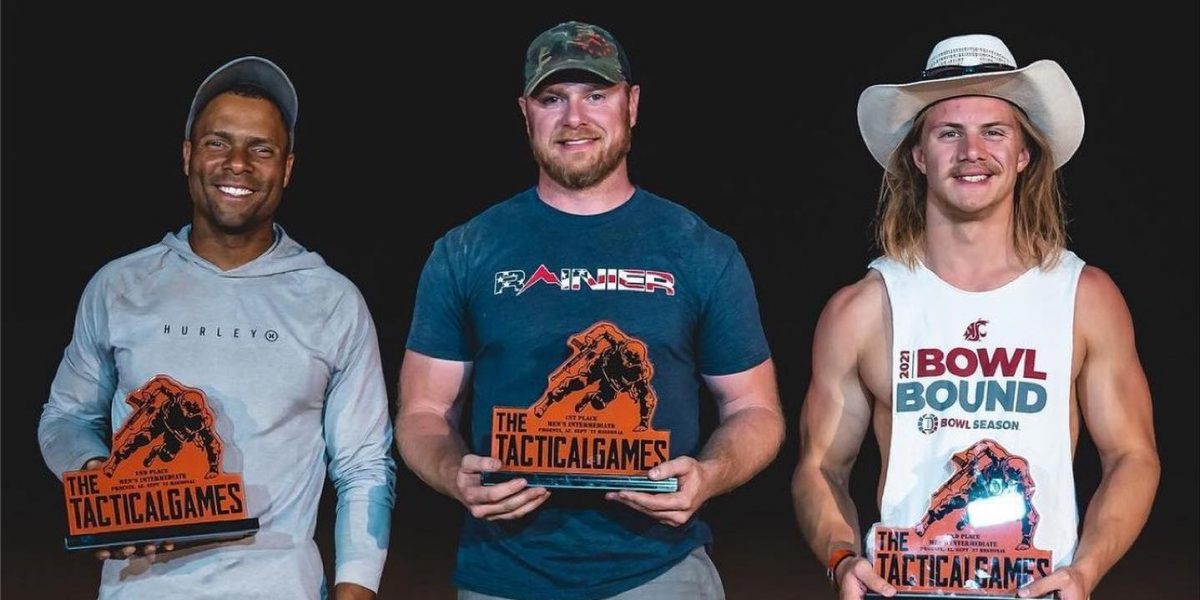 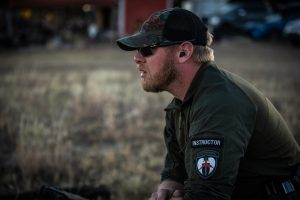 My name is Shawn Johnston, and I recently represented Rainier Arms while competing in The Tactical Games in Phoenix, Arizona. I took home the 1st place trophy for my division and 3rd place overall, with quite a few bruises, scrapes, a nice sunburn, and plenty of sore muscles. Although taking 1st place feels impressive personally, pride and confidence are among the best feelings I walked away with. I was returning to Rainier Arms Firearms Academy with a win primarily due to the top-tier training! Which I received at Rainier Arms Firearms Academy and the industry-leading products Rainier Arms manufactures alongside the other great companies Rainier Arms carries.

Let me give a brief description for those unaware of what The Tactical Games (TTG) is all about. TTG is a competition that combines athletes’ physical fitness, marksmanship, and tactics against each other over two days. Each day consists of three battles and a “floater” or “aggregate.” A “battle” is a period where the athletes must perform a combination of grueling exercises—like the Cross Fit games, performing specified shooting series between activities, typically with carbine and handgun. The floater is a shorter period where the athlete’s physical fitness is tested individually against the other athletes.

The aggregate is a shorter period where the athletes’ shooting ability is tested separately against the other athletes. To enhance the difficulty, all male athletes must wear a plate carrier weighing 15lbs slick before magazine pouches or anything attached. Female plate carriers must be 12lbs slick for the inquiring women out there. In addition to the plate carrier, the athletes must have their rifles, handguns, and all ammunition for the battle. In addition, some of the divisions have specific rules on what type of optics can be on rifles and pistols. In short, I spent both days from 0600-1800 either beating my body to exhaustion or recovering from the last battle. So that I could continue beating my body to fatigue during the next battle, it might sound terrible, but I love it! 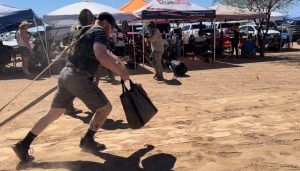 This weekend was a tough one. I went from southern Kansas’s hot, humid climate to the hot, dry weather of Phoenix, Arizona. With a high of 104*. That change had more of an effect on me than I was anticipating. All my physical training was done here in Kansas, with plenty of humidity. We only know the battles the night before the competition starts. Training consists of preparing for any and every possible physical challenge that can be imagined. The dry air in Phoenix left me feeling like my mouth was drying out no matter how much I hydrated. The most annoying part of each battle wasn’t how hot I was but how annoying it was trying to keep my tongue from sticking to the roof of my mouth. While I was breathing in through my nose, trying to control my breathing during the multiple shooting sequence of each battle. Oh, and the dust and dirt flying everywhere did not help this at all. The stages were physically strenuous. Each match is created by someone who loves and understands the torture we athletes have grown to love and hate simultaneously. Some stages were designed to challenge full body strength with sandbags as heavy as 200lbs. Some stages gassed the leg muscles. Others tested and challenged endurance and athleticism. They all challenged mental toughness.

The team of battle developers at TTG did a great job of making the shooting portion of each battle hard in their way. The targets were at challenging distances, in nontraditional shapes, and most were quite small. The shooting sequence for each battle challenged my shooting fundamentals but also required me to remember how many shots from which port at which target with which gun. Shooting too many shots from a single port on the VTAC, hitting the targets in the wrong order, or too many times resulted in time penalties which are incredibly important to avoid in a competition that can be won or lost in a matter of seconds. I remember thinking about how thankful I was for the multiple times I had taken Defensive Handguns I & II. Along with Defensive Carbine I & II with Andy and Don. My success and ultimately landing in 1st place came from those courses and the countless others I have taken with Rainier.

Overall, my experience with The Tactical Games in Phoenix, Arizona, was terrific. I went into this competition wanting to push my body near its limits. I tried to put my training to the test and showcase what Rainer Arms and Rainier Arms Firearms Academy can do. And admittedly, I needed to fill that void of “embracing the suck” that I miss from my time as a college football player. I got what I wanted, and I can’t wait for more! 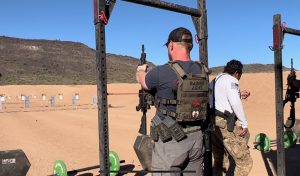 My success reflects my training with Rainier Arms Firearms Academy and the great gear they manufacture and carry. Some of the critical equipment that helped lead to my success are the Rainier Arms RUC rifle, Nightforce NX8, and Staccato XL. The Rainier Arms RUC felt like an extension of my body. If you know what I mean, then you know how good that feels. Nothing about the rifle was fighting against me. The 14.5″ barrel with a pinned and welded flash hider was the perfect length I needed. The rifle’s weight was manageable even with the LPVO, sling, and hand stop. My selected setup paid dividends on the stage, where I had to hold the rifle directly out in front of me for two minutes at the start of the stage. My RUC ran smoothly and true, even after two days of being in the Phoenix dirt and dust and my sweaty hands all over it. Thanks to Henry, our gunsmith, for being a great teammate and meticulously cleaning my rifle and handgun. They were a mess, for sure. 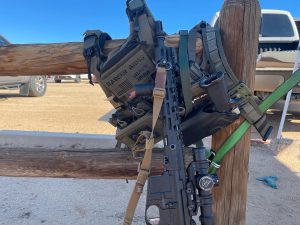 The RUC rifle and Nightforce NX8 were a sweet combo and complemented the capabilities and limitations of my setup. Those two fine pieces of engineering go well with each other. The glass was crystal clear. The reticle was easy to see and read, making using my other holdovers super fast. Then there is the red illuminated reticle when needed. At first, I was curious if I would even use it until I saw the aggregate. We had five steel targets we had to hit at 100 yards very quickly. The illuminated reticle helped me get hits on that steel very soon before sprinting 70-80 yards to the handgun box to hit the same steel with the Staccato XL.

Staccato XL. Need I say more? Shooting a Staccato XL is an experience alone. If you have not had the chance to shoot a Staccato XL, do yourself a favor and make your way down to Rainier Arms Firearms Academy in Wichita, Kansas. We have a whole line of Staccato handguns in our rental case. We would love to provide you with the Staccato experience! When it comes to Tactical Games, you can throw a stone at a group of athletes. You will have a high chance of hitting someone with a Staccato on initial impact and almost equally as good of a case of the stone bouncing off and hitting another athlete with a Staccato in his holster.

There is a reason for that. They are amazing. I settled on the Haley Strategic D3CR Heavy for my plate carrier front panel. You might notice that most other athletes use something smaller or flat to limit how much the front panel sticks out. They do this because many stages require us to stress carry or get something up and over a bar. A big “bulky” chest rig attached to the front of the plate carrier can add difficulty that most want to avoid. I approached the situation differently. I wanted to compete with a setup I use for my other tactical training and what I would use in real life if I ever needed to. So I choose to train with the Haley Strategic D3CR Heavy because it allows me to carry the ammunition I need and have real-life storage solutions for a med kit up front and whatever I may need. During the competition, that larger pouch on the front houses several essential tools. A bungee cord that I use to keep the rifle from bouncing around when I have to go on the extended run portion, a quick lens wipe in case my LPVO lens gets too dusty/muddy/wet to use, and a small bag of skittles. Because one never knows when a small bag of skittles might be needed. 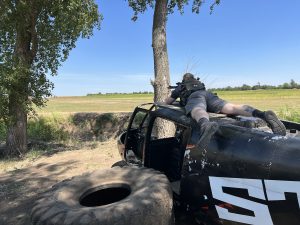 Overall, I was very happy with my gear choices, and I don’t see myself making many big changes to my gear before my next competition. I recently got a pair of the Viktos Johnny Combat boots and Viktor trainers that I look forward to wearing in TTG. There are many gear options out there, and I am glad to work at a company that carries some of the best gear and is full of knowledgeable coworkers that save me much guesswork! That’s my secret weapon. It can be yours as well! 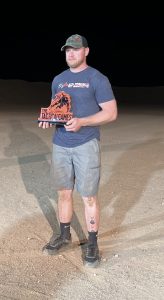 We look forward to seeing you soon in one of our training classes and on our product floor, or check out our website! And remember, No Off Season!