What is Wheelgun Wednesday? 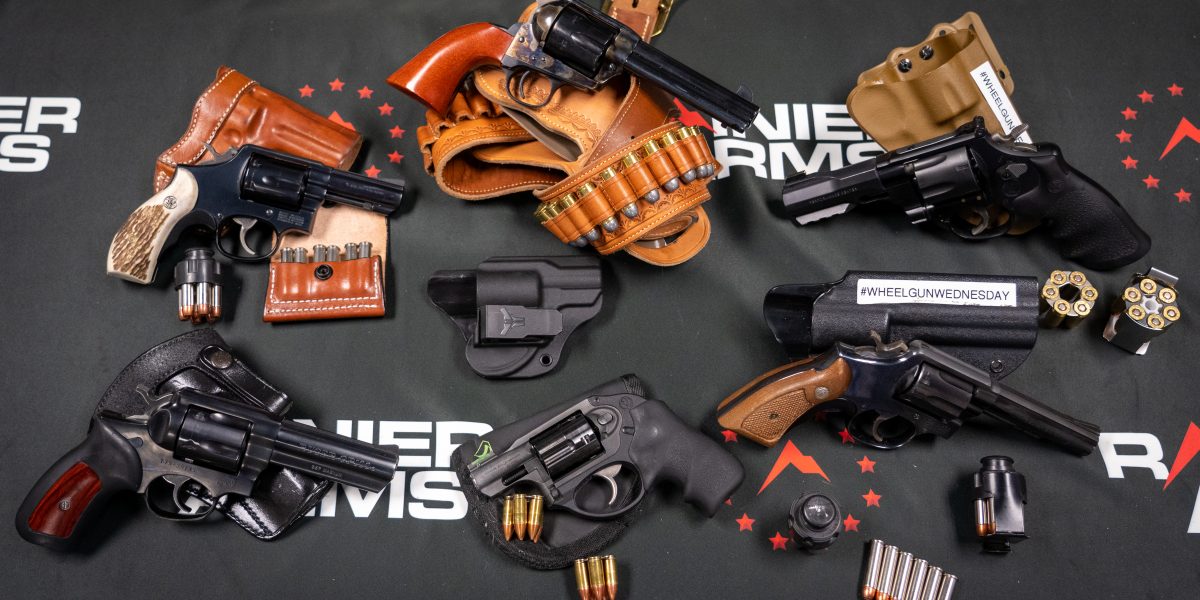 Most people who know me also know that I carry a revolver on Wednesdays. It goes back to a conversation I was having with some fellow gun enthusiasts where I was showing off 4-5 revolvers I had at the time. It was a Wednesday and after one friend came over to see them, he asked “What is this? Wheelgun Wednesday?” I gave him my “Mind blown” face and he replied “I guess it is now.” Since that day, at least professionally, it has been so. In my personal life, any day can be “Wheelgun Wednesday”

My connection with the revolvers started at an early age. My grandpa Dave carried a Jana-Bison Single Action .22lr with plastic faux stag grips in the glove compartment of his car. When I was lucky enough to get a chance to go fishing with him, I’d sometimes get extra lucky and he’d allow me to check it out. When I was extra-extra lucky, I’d get to take a couple shots at discarded beer or soda cans found in the area.

In the Steve Earle song (the Waylon Jennings version is my favorite) Devil’s Right Hand, there’s a line that goes “My very first pistol was a cap and ball Colt, shoot as fast as lightning but she loads a mite slow”. Well, my first pistol wasn’t a Colt but it was a cheap copy of a cap’n ball Remington .44 1858. What I learned from it was that I wanted a cartridge pistol. At around 14 I saw the late Bob Munden on TV. The man was otherworldly fast and accurate with a single action revolver and any other gun for that matter. If you’re unfamiliar with him, search his name on Youtube and prepare not to move for a while. I knew I wanted a good single action revolver so I sold the Remington knock-off and saved up for a Ruger Single-Six .22lr/.22mag, the best I could afford as a high school student with a part time job. I carried it on many hunting and plinking adventures until shortly after I graduated high school.

I was 19 and had the Single-Six along with a few hunting rifles and shotguns but nothing one would consider a “combat firearm”. Then it happened. A guy I worked with at the time had a new 4”, stainless steel, .357 magnum Ruger GP100 for sale. The right caliber and barrel length in a quality double action revolver. It also came with 500rds of IWI .38 Special ammo for about $400 if memory serves. I had that gun for about 2 years and then something happened, I turned 21 years old. All of a sudden, I could get any handgun I could afford. A West German Sig P220 in all mighty .45ACP and Beretta 92FS 9mm soon joined the collection and the revolvers were sold off. I’ll save the 1911 story for another time.

However, the siren song of the six-shooter (sometimes five-shooter) remained and I knew I’d be owning some again. 25+ years pass and a few Smith & Wessons and Rugers here and various other revolvers there and I’m proud to say, I have a decent wheelgun collection again. At some point I added a blued 4” square butt S&W Model 13, a heavy barreled K-Frame in .357 magnum. Then, a S&W 325 Thunder Ranch .45ACP came along so those are the two revolvers you’ll most likely see me with most Wheelgun Wednesdays. Though, from time to time it may be a 4 3⁄4” .45 Taylor & Co. 1873 Single Action Army in a rig made by Kansas leather artist David Carrico from Edna. A Smith 986 7-shot 9mm will replace the M13 soon once a suitable holster is made. What you won’t see is the one of a couple different pistols in a pocket holster to back up (again, another subject for another time) the main gun.

While the manual of arms for the DA revolver are of course quite different from the semi-automatic pistol, they’re not impossible to learn and then Train, Practice and Repeat with. They can be hungry beasts and keeping them fed is a skill in itself. According to the FBI the average gunfight is 3

shots at 3 yards in 3 seconds. If the shooter is capable, the revolver is more than a capable tool. There just seems to be an attitude among most shooters I come across that the revolver is completely inadequate. Even the majority of people I see shooting them on the range here at RAFA seem to consider the wheelgun a piece for amusement or an oddity and not a serious fighting tool. It gets such disregard from some that I’ve heard more than a few people say things like “I guess if I decide to rob the place, I should do it on a Wednesday.” If the same people had a revolver pointed at them on the street, I doubt they’d think it was funny. I think it would be equally unfunny to respond by saying “I guess the next time I see you here on a Wednesday, I should just start shooting?” It’s partially a generational thing. I’ll be 50 this year and I remember the police that protected the streets of the towns where I grew up and the cops that patrolled the streets on the TV/movie screens of my youth all seemed to carry revolvers. I can recall the reverse being the norm. I remember a trio of patrol officers came to my high school to speak to students about the evils of one thing or another. Two of them carried a S&W 66, .357 magnum revolvers and the third carried a Sig P226 9mm. The one with the 226 was called “Joe semi-auto” by the other two. I don’t remember what class I was in, the teacher or the subject but I remember what they said regarding “Joe’s” sidearm.

It’s an unfortunate time to be a fan of the revolver. I recently learned that Smith & Wesson hasn’t made a steel frame handgun in two years, to include their line of 1911s, Victory and M41 .22s. Their aluminum framed 5-shot .38 J-Frames are becoming more accessible but new, larger K, L & N frames are nowhere to be found. I’d guess it’s the same with Ruger. Colt’s Cobra and Python lines are trickling in but don’t stay available for long. Even the Chiappa Rhino line is elusive. For those who like the very

best and have the champagne budget to go along with the champagne taste, the Nighthawk Korth line is worth looking into. The pandemic is the reason I assume, and polymer framed pistols are easier and less expensive to build. Hopefully, we’ll start seeing them available again with the new year.

I know the semi-auto rules the roost as that’s what I mostly carry. But the revolver, wheelgun, six-shooter, smoke wagon or “Devil’s Right Hand” will always hold a place in my collection, holster and hip. Therefore, it will also hold a place in my training, practicing and repeating.