Can An AK Be Modern? 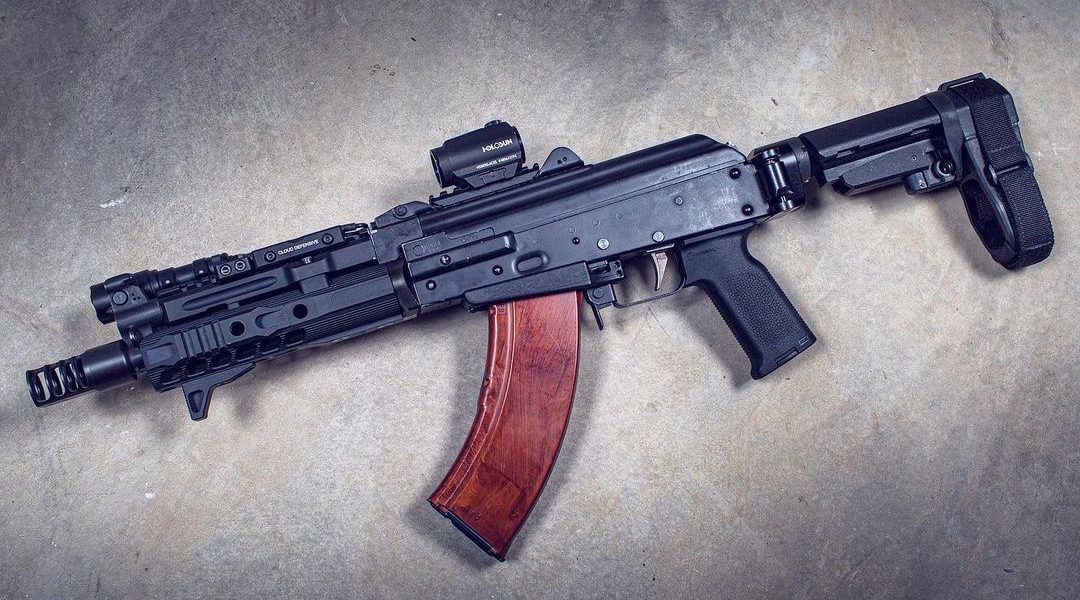 Can An AK Be Modern?

I doubt that when Mikhail Kalashnikov designed his original AK-47 prototype he could have imagined that nearly 100 years later it would still be a common sight not only on battlefields across the world but also in the homes of millions of the very same capitalist Americans it had become a symbol of resistance to. Nor could he have imagined that in late 2014 a younger me, new to firearms, would be carrying one home from the gun show after making the trade of a Glock 32 I’d won in a raffle.

Back in those days a good AR-15 cost almost a thousand dollars and the best budget AR, the Smith & Wesson MP15 Sport, was still $600 or more in the wake of the 2012-2013 panic. Ammunition was barely trickling back to the shelves and at this time a good AK could be had for $300-$500. For a bit more you could get a great AK. I was working at a movie theater for slightly above minimum wage at the time and a great AK was out of my price range so between a nearly-free Glock 32 and a couple Benjamins I got a good AK: the Romanian WASR-10/63. I’ve had over 10 AKs since then and I’ve learned about what works and what doesn’t work and now Kalashnikov’s rifle sits at my bedside every night.

Turning an AK into a modern defensive rifle was not easy then. Today, we are spoiled by choice and it has never been easier to outfit an AK rifle as a personal defense implement – not just a Cold War collector’s piece.

In those halcyon days trying to put an optic on an AK rifle got you odd looks. Unless you were a contractor in Iraq modifying your AK to accept a modern optic was seen as something of a novelty. Midwest Industries was the only American company making decent handguards and gas tubes for different optics but were expensive and heavy. Ultimak had a railed gas tube but anything less than an Aimpoint or EoTech would boil after prolonged use. Foreign made side rail mounts and optics were about the best option but getting them was nigh impossible and the optics were primitive at best. Forget about mounting a modern magnified optic.

Back then I just ran an Ultimak gas tube and ponied up for an Aimpoint, not that I had many options for quality red dots. Nowadays, Holosun, Vortex and Primary Arms all make quality budget dots that can withstand the heat of a railed gas tube and the harsh recoil of the AK action. RS Regulate is the option for a side rail mount, with optic-specific patterns for optimal placement. They even make an LPVO possible on an AK. Midwest Industries has also stepped up their game with optic-specific side mounts.

Let There Be Light

I am a firm believer that a defensive firearm is not complete without a good quality white light. Bad guys tend to be nocturnal creatures and I like to be able to see my target and know it’s a threat. Good flashlight options are abundant and I won’t go into detail other than to say Surefire and Cloud Defensive are where I start and end on that.

But how do you get that thing onto the rifle? It wasn’t uncommon to duct tape a flashlight to the handguard of your AK, and I’ve even seen fighters in Syria doing similar today. Using a shotgun magazine tube clamp to hold a handheld light was high-speed. Now? An MLOK compatible handguard like a Midwest Industries or a Magpul, or even a picatinny railed version will allow you to use any modern weapon light mount. 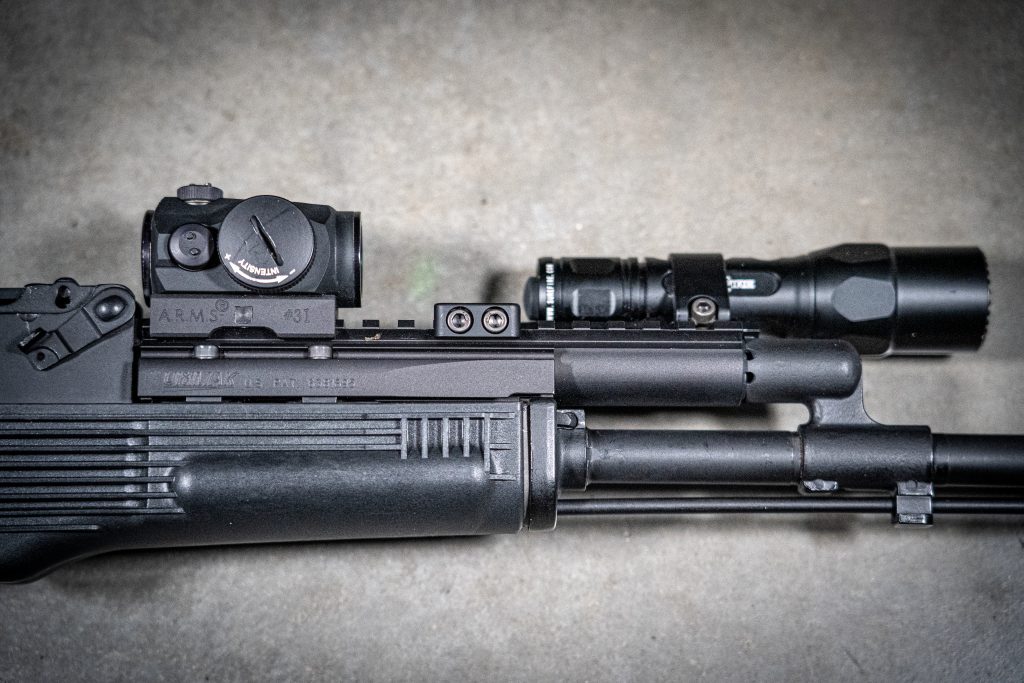 While TAPCO was best known then for being the source of many SKS rifles defiled by amateur “gunsmiths”, and is best known today for being out of business, they did contribute one product that was universally praised: the G2 AK trigger. At least when it didn’t slap your trigger finger on reset. I came home from many a range session with my trigger finger positively throbbing in pain after a few hundred rounds.

The Battle Arms Development AK trigger is a substantial improvement. A crisp break and very positive reset that doesn’t leave you with an aching trigger finger. It’s easy to shoot fast with and be accurate. I find it to be a good trigger for target shooting and rapid fire while still retaining a pull weight comfortable for defensive shooting. If your preference is a single-stage trigger with a light wall these are a real winner.

Arsenal Inc rifles now include the FIME Group Enhanced Fire Control Group, a two-stage trigger with a 4.5lbs pull weight. These are a massive improvement over the original milspec AK triggers found in Arsenal rifles that often had a gritty, mushy break. Not a thing you’ll notice when your hands are gloved in the Siberian winter but to a modern American sensibility the FIME Group Enhanced trigger is the equal to any two-stage AR trigger of a similar weight.

While many AKs come with the cotton canvas military sling standard issue to forces that employ AK rifles, most people looking to employ such a rifle defensively would find the sling ill-suited for the work. Great for slinging while on the march, terrible for keeping your rifle attached to your body when fighting. Luckily, Blue Force Gear makes a modernized variant. Easily attached to the front sling loop with the Molded Universal Wire Loop the sling can be installed on any AK with any sling mount configuration. Gone are the days of re-drilling stocks to change the position of the sling mount for a more tactical use.

But if you would rather use a more modern two-point sling like a Flatline Fiber Co or a deceptively-named GBRS Group Second Best Sling the solution is also quite simple. A loop of paracord through the sling mounts, knot sealed with a lighter. This will give you the freedom of movement and ease of use for any traditional two point sling. The old standby method of carving a notch in your pistol grip to loop paracord around the grip screw for a single-point sling mount is also good for those that prefer a single point sling or a two-to-one.

Years of training with the AK platform has taught me how to be proficient with a standard safety, able to slice it from safe to fire with the index and middle finger of my firing hand in the time it takes to bring the sights up onto my target. I will admit, however, that every time I do there is the nagging worry that I’ll flub the manipulation.

Thankfully the geniuses at Krebs Custom designed the enhanced AK safety that all others merely imitate. Allowing the shooter to maintain a firing hand grip while manipulating the safety with just the trigger finger. They even have a version for you lefties to work with your thumb. Does it make me faster? Probably not. Does it give me the confidence that I can work my gun under stress? Absolutely!

The Most Important Upgrade

As time has marched on and AR-15 rifles have become more accessible and affordable the AK has undeservedly gotten a reputation as an inferior firearm with an unergonomic design. While the base design is even older than the venerable M14, the idea that it is outdated or obsolete flies in the face of the millions of AKs currently being employed throughout the world. As an “AK Guy” I’ve gotten my fair share of ridicule from “AR Guys” who insist that because they don’t know how to operate a Kalashnikov it must therefore be inferior.

I can tell you from experience on both platforms the truth is that the hardware is only as good as the software. The most important thing you can do to make your AK better is to get quality training and to practice with your firearm.

Rainier Arms offers some of the best training I have ever received and I cannot recommend it enough to those that want to build proficiency on their weapon system, AK or AR.